PETALING JAYA - Malaysia’s universities have reached unprecedented heights, with 12 of 20 local institutions rising up the ranks, with six remaining stable and only two losing ground in the Quacquarelli Symonds (QS) World University Rankings.

UM improved its performance across four of the six metrics utilised by QS, including the noteworthy rise of 76 places in citations per faculty, the research impact indicator. 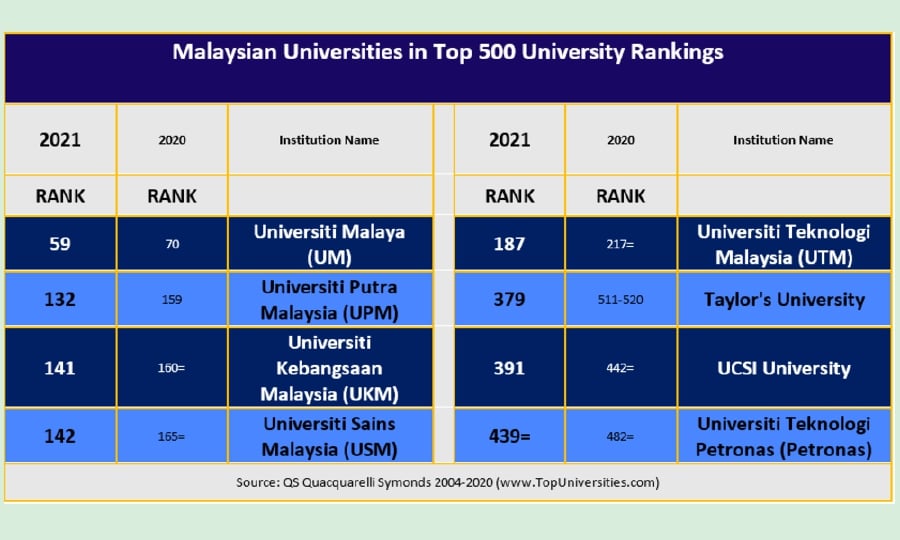 Taylor’s University (379th) recorded most impressive year on year growth, jumping up 135 places and breaking into the world’s top 400 universities for the first time ever.

“The ascendancy of the Malaysian universities in our rankings is the result of concerted efforts and sustained investment,” QS Research Director Ben Sowter said in a statement.

“According to the Ministry of Education, last year 19.1% of total government spending was allocated to education. The research and development budget was also increased. The reputation of the local universities is growing steadily among the international academic community and global employers.

“This positive trend must be celebrated as it is an extraordinary result especially considering that the rankings are dynamic and very competitive.”

However, Malaysian universities cannot afford any complacency, especially when it comes to producing influential research.

“The leading Malaysian universities are committing a good level of teaching resources as measured by our faculty/student ratio,” Sowter said.

“When it comes to research intensity and impact, the best national performer is UM (241st) while the next best is UTM (461st). An ambitious country like Malaysia, will surely aim for research excellence as well as continuing to invest in teaching excellence”.

The QS World University Rankings rank the world’s top 1,000 universities. They are the world’s most-consulted and most-covered source of comparative information about university performance, with their flagship website, www.TopUniversities.com, receiving over 149 million views in 2019.

For the 2021 edition of the rankings, QS surveyed 102,662 academics and 51,649 employers whose insights and opinions informed the reputational indicators.